THE TOKAIDO ROAD formed part of a system inaugurated in 1603 by Tokugawa Iyeyasu when he became, for all practical purposes, the ruler of Japan. Taking the post of Shogun he made Edo (present day Tokyo) the seat of his government. From Nihon-Bashi, the great bridge over the Sumida River, just opposite the palace of the Shogun, roads radiated throughout the principle island of the Japanese Empire, and from this point all distances were measured.

The new constitution of Iyeyasu demanded an annual visit to Edo from all the daimyo; and twice a year, coming and going, the main roads were passed and repassed by their processions, splendid in equipment and in strength according to their degree. In the old days, it is said that the cortège of one of the leading princes numbered as many as 20,000 men, who carried out the journey with almost regal ceremonial.

For such, arrangements were made a month or so in advance. The posting-houses had to be warned and provision made for the accomodation of parties that often exhausted all the resources of the neighbourhood. The advent of a great daimyo was heralded by advance notices, so that the way should be clear and no inferiors should hamper the course of his magnificence. As he approached, all traffic had to give way, and other travellers, if still on the road, were required to prostrate themselves while he passed. Anyone failing in this homage was remorselessly cut down by the swordsmen forming the escort.

Of the five main highways radiating from Edo, the Tokaido was perhaps the chief. By this route came all the great nobles from the western provinces as well as the normal traffic between the two capitals of Kyōto and Edo.

On the highway there were fifty-three recognised halting- places or stages, and these, with the starting point at the Nihon-bashi - the Japan Bridge - at Edo and the finish at Kyōto, make up the fifty-five subjects commonly found in the series of Views of the Tokaido.

The Tokaido Road is 514 kilometres in length and traverses the provinces bordering on the southern coast of the island until, near Yokkaichi, it strikes inland by way of Kameyaa and Ōtsu, passing the southern end of Lake Biwa, to Kyōto.

Adams led the men along the famous Tokaido, which connected Edo with Kyōto. It was thronged with merchants, pedlars and peasants whose strange hats and traditional costumes made for a colourful sight. "Ever and anon," wrote Saris, "you meet with farmes and countrey houses, with villages ... with ferries over fresh rivers, and many futtakeasse . . . which are their temples." Saris was astonished when he saw the quality of the road. Its sand and gravel surface was "wonderfull even" and "where it meeteth with mountains, passage is cut through." The road was divided into leagues, and at the end of each league was a marker in the form of a "faire pine tree trimmed round in the fashion of an arbour". The purpose of these trees was "so that the hackney men, and those which let out horses to hire, should not make men pay more [than] their due".

The contrast with travel in England could not have been more striking. When Saris travelled from London to see his family in Yorkshire, he suffered the ordeal of broken roads and pitiful lodgings. English roads were muddy, potholed and often impassable in the wetter months of the year. "They are often very deep and troublesome in the winter," wrote William Harrison in 1587 in his Description of England. He said that landowners often refused to clean roadside drains, "whereby the streets do grow to be much more gulled [rutted] than before, and thereby very noisome for such as travel by the same".

Adams had sent a letter to the court informing them that he would soon be arriving with a small band of English visitors. When Ieyasu received this message, he immediately sent a palanquin and horses to make their progress even more pleasurable. Saris was particularly pleased to have been given a slave whose sole purpose was to run in front of him carrying a pike. The men stopped each night in roadside lodgings, where the owners would cook them rice and fish, with "pickeld herbes, beanes, raddishes and other roots". Saris noted that there was an abundance "of cheese", unaware that he was actually eating tofu, or bean curd.

There were few dangers on the road, and Adams's presence meant that the men were rarely abused or insulted. He explained to Saris that Japan had a tightly regulated system of local government, which imposed a rigorous discipline on the population: "[There is] not a lande better governed in the worlde by civil pollecy." Each town had a governor, and every street was gated. Houses were divided into clusters - with a headman charged with maintaining order - and everyone kept a close eye on the doings of their neighbours, especially after dark when a curfew was imposed. "Each street is closed at dusk," wrote the Spaniard, Rodrigo de Vivero y Velasco, "and soldiers are always on duty . . . If any crime is committed, the alarm is raised and in next to no time the gates are shut in order to catch the wrong-doer." The only sight to disturb the pleasure of the men's journey came at the approach to each town, where the road was lined with the crucified remains of thieves and murderers. As the party approached Shizuoka, the number of dead along the road began to alarm Saris. First, they passed a scaffold bedecked with severed human heads. Next, they saw row upon row of crucifixes, "with the dead corpses of those which had been executed remaining still upon them". Worse still, there were gobbets of flesh lying on the ground, "pieces of others, which after their executions had been hewn again and again by the triall of others' cattans [swords]". These were scattered across the road and caused the men "a most unsavourie passage".

From Samurai William - The Adventurer Who Unlocked Japan by Giles Milton
The story of the English mariner who lived in Japan for over a decade at the beginning of the 17th century.
Hodder and Stoughton Paperback 2003

OBSERVATIONS OF CAPTAIN OSBORNE IN 1858

The English Captain Osborn, who travelled along part of the road about the year 1858, says that of these stages on the Tokaido:

The lords of the various manors are compelled by the authorities to maintain these places of refreshment for travellers; they are vastly superior to the caravanserais of the East, and relays of horses or porters are always ready at these post-houses, and must do all work at a regular fixed charge, ridiculously small according to English notions. Another and still more onerous duty falls on these establishments, and that is the responsibility of forwarding all Imperial dispatches between the two capitals, or from Yedo to any part of the Empire. Runners are consequently ever ready to execute this task.

The social status of the person is indicated by the manner in which he travels. The daimyo and people of the upper class travel in norimono, which are roomy enough to allow a fair amount of ease, and are comfortably furnished. The sides can be opened or closed at will, as a protection against the weather. The length of the pole proclaims the rank of the passenger; if a nobleman, a long pole borne by five or six men at each end; a person of lower rank, a shorter pole and only four carriers. If the occupant is a prince of the royal family, the pole rests on the palms of the hands, otherwise it is borne on the shoulders. Humble individuals have to be satisfied with a hago carried by two porters, which entails a very cramped position. In steep mountain regions everyone, whatever their rank, is obliged to use a hago.

STATIONS OF THE TOKAIDO ROAD 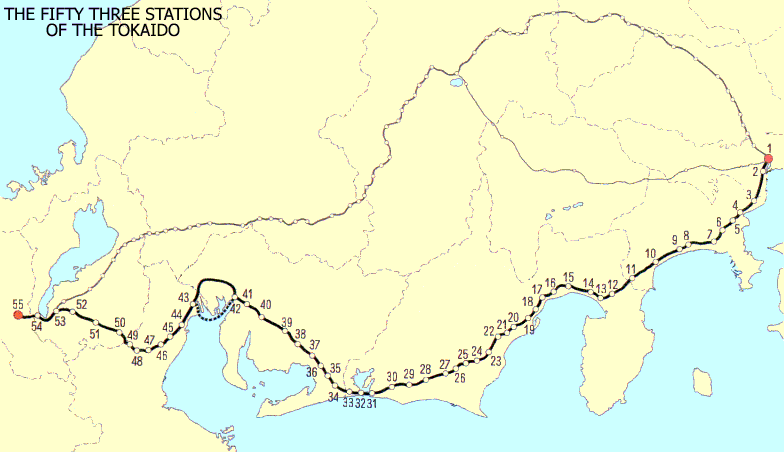