By the late 18th century, a set of standard formats for printing blocks and paper were being used in the commercial production of woodblock prints. Edo publishing houses agreed to use two standard paper sizes: the ōbōsho sheet (390 x 530 mm) and the kōbosho sheet (350 x 470 mm). Half an ōbōsho sheet gave the 'standard-large' ōban sheet of 390 x 265 mm; half a kōbosho sheet gave the 'medium-large' aiban sheet of 350 x 235 mm.

Each ōban or koban sheet could be further subdivided when printed with two or more designs. These smaller prints could then be sold individually more cheaply than the single prints made using a full-sized sheet. 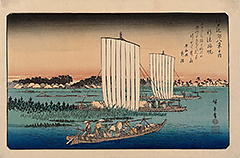 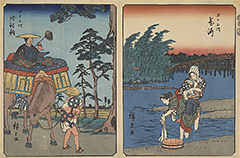 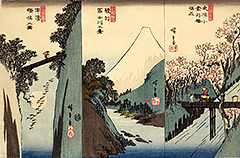 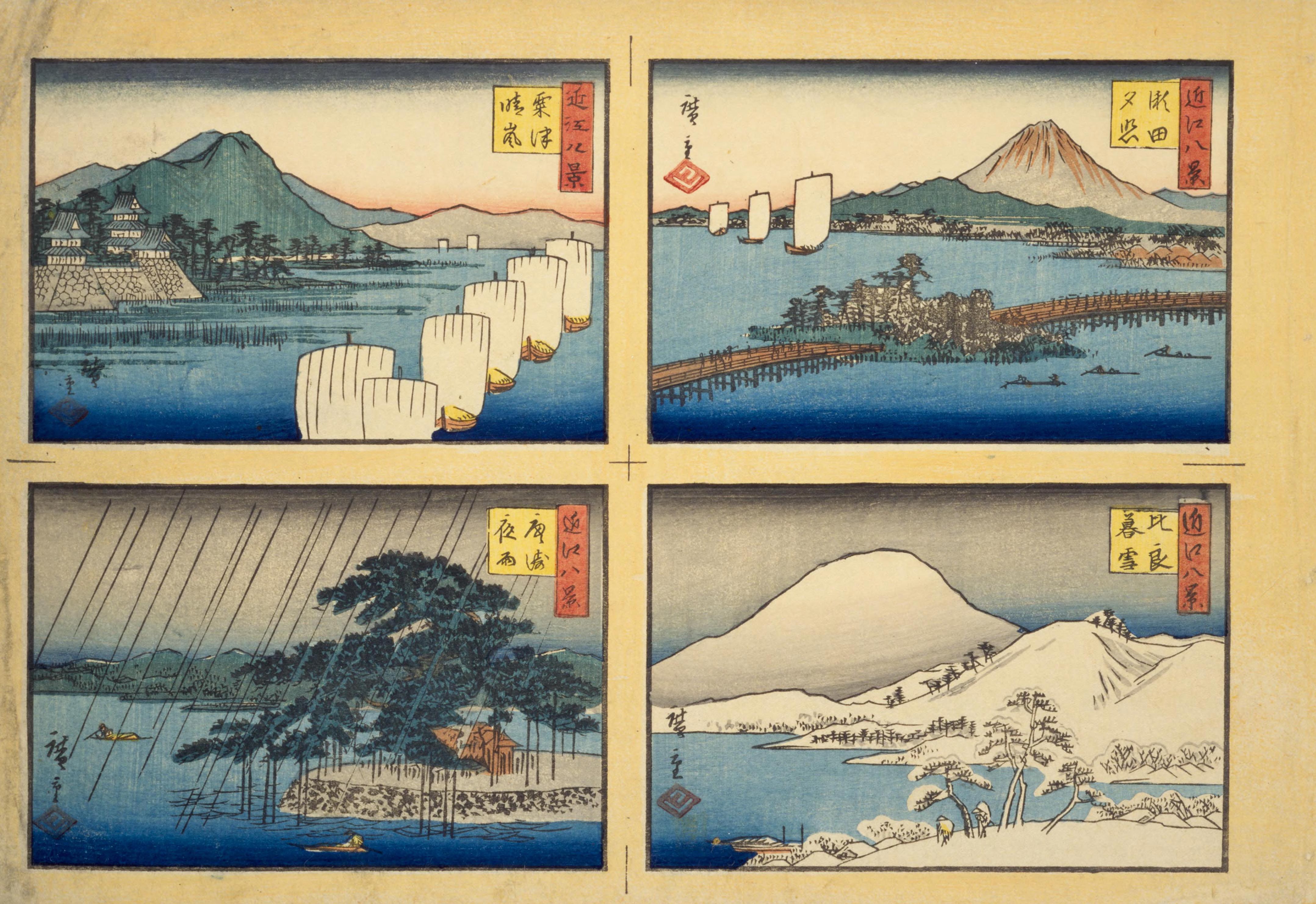 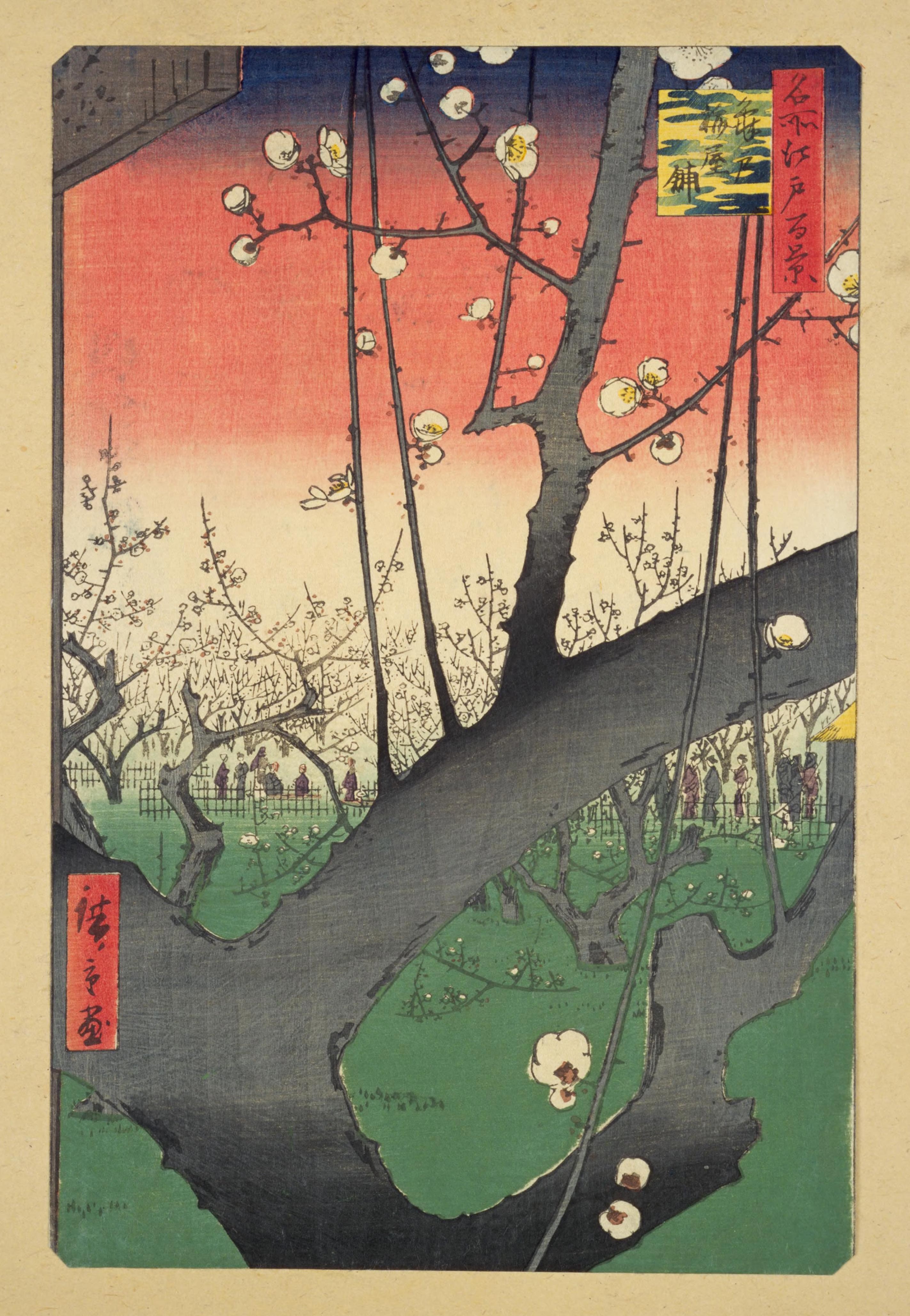 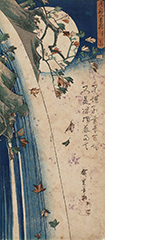 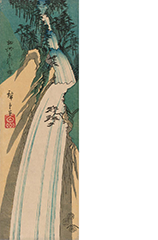 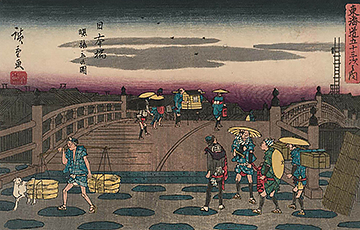 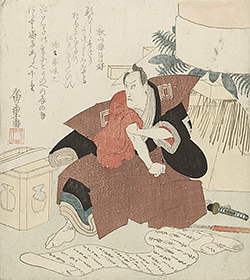 Types of Printing and Colouring

nishiki-e
separate woodblocks are carved for every colour and used in a stepwise fashion (Wikipedia)
aizuri-e
blue printing (more at J Noel Chiappa)
sumizuri
printing from a relief block in black ink to produce black-on-white texts and images
sumizuri with usuzumi
printing from two or more relief blocks in various shades of black ink
tashokuzuri
printing from multiple relief blocks in many saturated colours
tanshokuzuri
printing from three relief blocks in black and a limited range of light tints, usually pink and gray
kappazuri
stenciling, applying colours by brush to sheets printed with line-only illustrations, using a separately cut stencil for each colour
bokashi
printing areas in one colour of graduated intensity by the differential application of a pigment to a relief block
hissai
applying colours by brush to sheets printed with line illustrations
karazuri
impressing patterns into a sheet of paper from an uninked relief block
References:
The World of the Japanese Illustrated Book

Finding Japanese Prints on the Internet

John Resig's Japanese Woodblock Print Search contains over 200 000 prints. The site also has an extensive list of links to other sources of prints.

Ritsumeikan University image search (in Japanese) contains links to over 200 000 prints.
A list of artist names in Japanese can be found here.

Japanese Woodblock Prints on Other Websites

J Noel Chiappa's website contains some excellent material on Hiroshige and Japanese woodblock printing in general.
Encyclopedia of Woodblock Printmaking
Tokaido hitoritabi (Japanese) A modern day walk along the route of the Tokaido highway. The site features Hiroshige's Tokaido print (Hoeido edition) of each station and photographs of the places as they are now.
@Cascadesssss has produced an interactive google map that shows the location of prints from a number of series by Hiroshige and Hokusai.

Wright's Tokaido (Independant Arts Production on YouTube, 36 min)
A documentary about an original album of Hiroshige’s 53 Stations of the Tokaido Road annotated by the celebrated American architect Frank Lloyd Wright.

The Thirty-two Aspects of Women by Yoshitoshi (Independant Arts Production on YouTube, 27 min)
A new film by the creators of Wright’s Tokaido. A documentary on an original album of Yoshitoshi’s famous 32 Aspects. An educational, documentary style look at a recently rediscovered classic by one of Japan’s most controversial print artists.

I can be contacted at john_at_hiroshige.org.uk. Obviously replace _at_ with the obvious.

I have no Japanese, I don't work in the art business and I don't have any specialist art history training but I do try to make sure that all the information on the website comes from reputable sources.