In 1858, after two centuries of isolation, Japan was forceably opened up to trade with the rest of the world. Cheap, colour wood-block prints were among the items from Japan that reached the West. Artists including Manet, Degas and Monet, followed by Van Gogh and others, began to collect and be influenced by these prints. Japanese artworks brought with them new ideas of composition, colour and design.

By the time of his death in 1926 Monet had made a collection of 231 Japanese prints, many of which still hang in his Giverny home.

"I envy the Japanese for the enormous clarity that pervades their work. It is never dull and never seems to have been made in haste. Their work is as simple as breathing and they draw a figure with a few well-chosen lines with the same ease, as effortless as buttoning up one's waistcoat ...."

In early 1887 in Paris, Van Gogh purchased no fewer than 660 Japanese prints in one go, with a view to selling them on and earning some money. Although his little business venture came to nothing, Van Gogh now fell entirely under the spell of this art. [ref]

Vincent van Gogh
Flowering Plum Orchard (after Hiroshige), 1887
(Van Gogh Museum, Amsterdam)
This painting was based on the print by Hiroshige.
Van Gogh's tracing of the Hiroshige print. 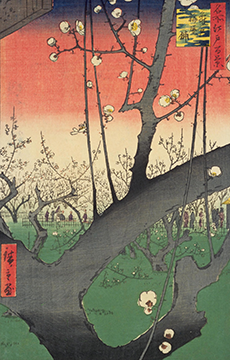 Vincent van Gogh
Bridge in the Rain (after Hiroshige), 1887
(Van Gogh Museum, Amsterdam)
This painting was based on the print by Hiroshige. 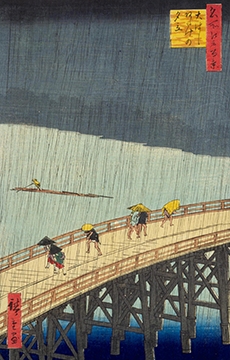 Vincent van Gogh
Courtesan (after Eisen), 1887
(Van Gogh Museum, Amsterdam)
A painting based on a woodblock print by Kesai Eisen

"This artistic abode of my son is ornamented by a very rare collection of Japanese and Chinese. He considers the paintings upon them the finest specimens of art, and his companions, who resort here for an evening’s relaxation occasionally get enthusiastic as they handle and examine the curious figure portrayed." 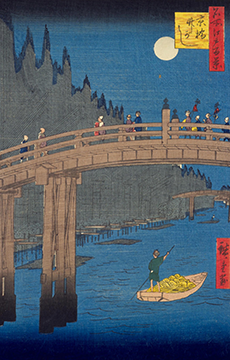 James McNeill Whistler
Variations in Flesh Colour and Green: The Balcony, 1864-1870
(The Freer Gallery of Art and Arthur M. Sackler Gallery)
Models dressed in kimonos pose on a balcony overlooking the river Thames.

"A Japanese artist grasps form always by reaching underneath for its geometry. No matter how informal, vague, evanescent, the subject he is treating may seem to be, he recognizes and acknowledges geometry is its aesthetic skeleton; that is to say—not its structural skeleton alone but—by virtue of what we have termed the symbolic spell-power—it is also the suggestive soul of his work."

"The first and supreme principle of Japanese esthetics consists in a stringent simplification by elimination of the insignificant and the consequent emphasis on reality…Always we find the one line, the one arrangement that will exactly serve…that inner harmony which penetrates the outward form and is its determining character...."

"The most important fact to realize ... is that, with all its informal grace, Japanese art is a thoroughly structural art…It is always, whatever else it is or is not, structural.""

"If Japanese prints were to be deducted from my education I don’t know what direction the whole might have taken. The gospel of elimination preached by the print came home to me in architecture."

The celebrated architect Frank Lloyd Wright was exposed to Japanese art by Joseph Lyman Silsbee, his first employer in Chicago in 1887. He was already an established collector when he made his first visit to Japan in 1905, where he bought hundreds of woodblock prints. The following year, at the Art Institute of Chicago, he organised the first ever retrospective exhibition of prints by Utagawa Hiroshige (catalogue). In 1908 Wright participated in a second larger exhibition of Japanese prints from his own collection presented with those from other major collectors. In 1912 he published The Japanese Print: An Interpretation, a treatise on Japanese aesthetics. He held regular 'print-viewing parties' with his friends, colleagues and students.

Wright was a dealer in Japanese prints as well as a collector. Between 1918 and 1922 he sold nearly four hundred prints to the Metropolitan Museum of Art in New York and it is estimated that at least 20 000 prints found their way into American collections via Frank Lloyd Wright. He still had 6,000 prints in his own collection at the time of his death in 1959.

Japanese prints on display in Wright's living room around 1895